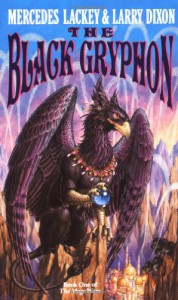 The entire Valdemar series is a favorite of mine and one that I have reread repeatedly over the years. The series unfolds in the form of trilogies, duologies, singles, etc., and this series, Mage Wars, is the start of it all.

The Black Gryphon takes place long before the Valdemar kingdom is founded, a time of magic and the fight for power. A war is brewing between two great mages, Urtho and Maar. Urtho wants nothing more than to protect his realm and the people in it. To that end, he has created a race of magical creatures to act as champions and protectors of the realm... the gryphons. Skandranon is the best of the best of these creatures... strong, brave, and of human intelligence, capable of independent thought. Maar, too, has created his own magical constructs, the makaar. These creatures, like gryphons, are supposed to be champions to the cause, but who answer only to Maar, whose quest is only for power.

Although Skan is at the center of the book, of equal immportance is Amberdrake. Drake is Skan's best friend, a human friend who is also a member of Urtho's troops, working among the troops as a kestra'churn. A kestra'churn is a combination of massage therapist, counselor, and social worker. Also important to the series is Zaneel, a new breed of gryfalcon, and Winterhart, a human trond'irn (a caregiver for the gryphons). Both of these ladies have issues of their own and their stories add so much to the story, not just for their own characters, but for development of Skan and Drake as well.

The characters are engaging, even if their arcs concern timeworm themes of gaining confidence, learning to let in others, etc. The dynamic between Skan and Drake is fantastic, despite the difference in species. They play off of one another and it makes for some unexpected humor. Gesten, a supporting character and a hertasi (a lizard-like, intelligent creature), is a bit on the sarcastic side, but his interplay with both Skan and Drake is great, often witty and sometimes just as the voice of reason. Zaneel is one of my favorites, her story alll about turning those things that you see as faults into strengths. Winterhart was not my favorite, despite her importance. She tended to let herself get wrapped up in bad situations without doing anything to stop them from drowning her. Because of that, she wound up taking it out on those around her. Her character probably changed the most throughout the story and, by the end, I sympathized with her. A standout favorite is Kechara, a misborn gryphon who is a supporting character, but adds warmth and sweetness to the story.

If you enjoy high fantasy, then this is a fantastic series to read! The entire series was published out of order (in terms of the world's chronology), so I would suggest reading it in the order suggested on the author's website.